SOME LEGACIES ARE BUILT ON A TUESDAY

A story forged on a Tuesday. That’s how it started. Two visionaries after the same rainbow – Nelson Mandela and Bertie Lubner, founder of Afrika Tikkun – met on the second Tuesday of every other month to discuss the love they both shared for their country, South Africa. What transpired was a deep seated friendship, and a plan: to eradicate poverty by empowering the children and the youth of South Africa. Nelson Mandela believed in the life-affirming values that Bertie Lubner had expressed around empowering the greatness of others. Bertie wanted to make more than a difference; he wanted to teach the power of possibility through the human act of kindness. When Nelson Mandela bore witness to an early Tikkun project in Orange Farm in 1996, he said he had “seen a miracle”. Through the work being harnessed by the good people of Tikkun, uTata (Mr) Nelson Mandela volunteered to become the Patron-in-Chief of Afrika Tikkun.

As a champion of upliftment through education, international icon and the first democratically elected President of South Africa, Nelson Mandela, became the Patron-in-Chief of Afrika Tikkun. Mandela believed that nothing could be more valuable than shaping the history of a country and his words of support still hold true, “With successful financial support Afrika Tikkun has the ability to reach our devastated population on a grassroots level.”

Madiba’s honourable involvement with Afrika Tikkun set Bertie and his team on a breakthrough path that began to support the restoration of people and communities in South Africa. Afrika Tikkun grew its philanthropy across South Africa and abroad, attracting the right donors and volunteers, with the right intentions. The way uTata would have wanted it. In a very fond letter, the late Nelson Mandela as the Patron-in-Chief, elaborated on how Afrika Tikkun’s projects demonstrated practically and sustainably what can be done with very limited resources. He attributed the work to great commitment and passion, a value system that has long since held Afrika Tikkun in solid stead. “With successful financial support Afrika Tikkun has the ability to reach our devastated population on a grassroots level,” said Madiba. And so, the legacy of Afrika Tikkun continues to build with the words of Madiba close at heart, and his great spirit deeply entrenched in our story of kindness. 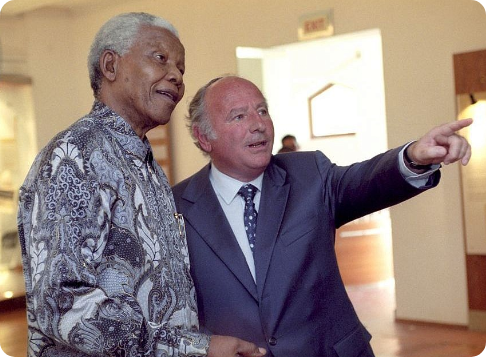