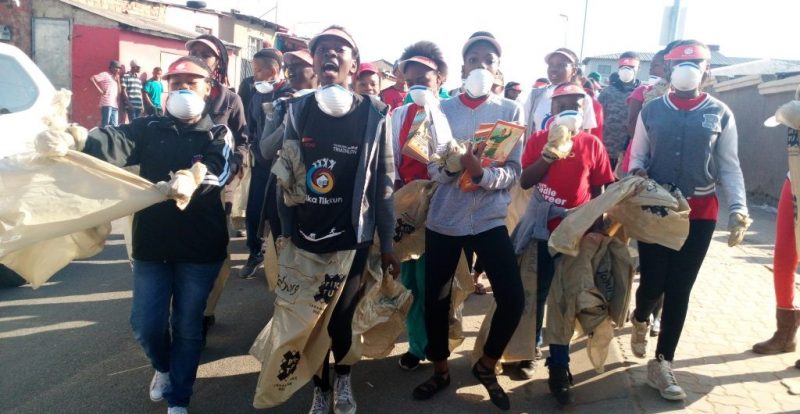 As we celebrate Women’s Month, it is important to note that young women in many township communities feel unsafe and 23 years since South Africa’s transition still fight for their right to human dignity, equality and freedom from all forms of violence. The key issue being raised is that without adult supervision (especially in Johannesburg’s overcrowded townships, where crime and gangsterism is high), young people are vulnerable not only to child neglect, but to trafficking and other forms of violence. After two incidents of attempted child kidnapping (for perceived trafficking purposes), young girls from Hillbrow have started raising awareness about the interlinked problems of child kidnapping and child neglect. One of these young people, is in fact a victim of an attempted trafficking. While she was being held, she heard her kidnapper making arrangements with the trafficker, and managed to escape thanks to her cries, which drew the attention of some passersby. Now, this young woman who prefers to remain anonymous, is being joined by her peers to speak out about a culture and cycle of extreme violence that they are witness to, “it’s not only violence of men against women, its women and men doing the abusing. Abuse is everywhere – in the family, community and in the school yards.”

In Alex, young women are campaigning against kidnapping for the purposes of rape – something which, they say they see an increase in. They are targeting their lobbying and awareness efforts at men and male children, but as part of these efforts, they will be offering self-defence sessions for women in August.

Gender violence and inequality are also key concerns for young people in Diepsloot. Many talk about seeing friends and siblings being raped by parents and caregivers, and generally high levels of violence.  One child from Diepsloot pleaded, “We shouldn’t be scared to go to the mall, because we are scared of the men that are going to hurt you. We need to be safe.  Children in schools are not doing well. They are failing because of all the things that are happening to them.”

“Kids in Diepsloot tell us it is dangerous for them to go to school because they could be mobbed at any point, held at gunpoint. They report that there is a lot of child abuse amongst parents or caregivers, uncles or family members. In Diepsloot there is so much going on that it is actually scary,” explained David Silva, youth development expert from Afrika Tikkun, the local NGO who is supporting their advocacy efforts.

Young women have too often been the victims of South Africa’s unrestrained crime problem; but given the opportunity, their lives are bursting with potential. Tinkerbell Rautheneimer of Hillbrow and Sandy Phala of Alex are just two of many girls whose dreams and solutions are being given oxygen through the empowerment and development initiatives of Afrika Tikkun. “Each day I go to school betters my chances of becoming a lawyer to be able to stand against things that are wrong in society,” declares Tinkerbell.

Sandy Phala’s hopes are also high: “My dream is to finish school with good grades so that I can study osteology and help people who suffer from bones diseases like arthritis. One day I hope to find a cure for serious diseases like cancer and make sure that the sick are cared for. I want to own many community clinics and help the existing ones with more medications.”

You can do something to support these young women’s advocacy efforts by joining them August 19, 2017 at their Annual Gender Imbizo in Alexandra (invitation attached), where they will be engaging with women to engage on key issues affecting families and communities.