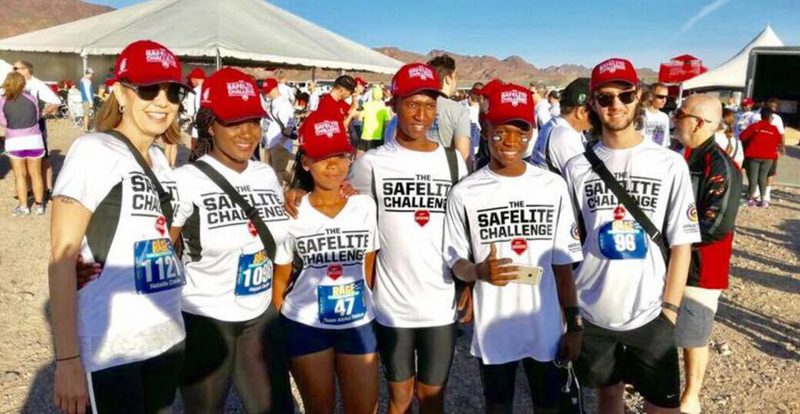 Over the past eight years, the Safelite AutoGlass Foundation has raised over $2,000,000 for charity through its annual triathlon, duathlon, and motorcycle poker run known as The Safelite Challenge. Each year, volunteers from the automotive glass and claims management company, Safelite, put on the one-of-a-kind charity event to raise funds for Afrika Tikkun. A global charity sponsored by Safelite’s parent company, Belron, the Nelson Mandela endorsed non-profit is dedicated to transforming South African communities by caring for vulnerable children and providing job training for young adults.

Open to all ‎12,500 Safelite employees, whose headquarters is based in ‎Columbus, Ohio, the event includes a 5K run/fun walk, sprint triathlon (individual or team relay), sprint duathlon (individual or team relay) and a motorcycle poker run. Positively engaging associates, suppliers and clients, and promoting Safelite’s commitment to social responsibility, participants commit to raising a minimum of $425 with the proceeds being donated to support Afrika Tikkun.

“I had a fantastic time with my Safelite family in Las Vegas,” Melissa Tyler posted on Facebook. Finishing second in the 5K, among women 50-54 years old, the Houston, Texas based Safelite AutoGlass technician wrote “can’t wait until next year.”

“I’ve spoken often about how much I love my company and my job. The Safelite Challenge 2017 was a complete success. 100% of the funds raised ($500,000.00) for this event has been given to Afrika Tikkun. Loving and caring is the Safelite way.”

Since 2005, the Safelite AutoGlass Foundation has supported organizations that promote the health and well-being of families. The Foundation administers giving on behalf of Safelite and its employees, providing support to approved causes, charities and initiatives in communities where its employees live and work.

“I am once again inspired by the selflessness of Safelite’s people, friends, family and corporate sponsors who give so generously to support a good cause,” Tom Feeney, CEO of Safelite AutoGlass, said after last year’s Safelite Challenge. Setting the company on course to doubling its business through two core principles, people powered and customer driven, a LaSalle University graduate, Feeney said “It’s our wonderful people who make Safelite the company it is – caring and compassionate. We are proud to support both this cause, and many others like it right here in the U.S.”

The Safelite Challenge has raised more than $2 million for Afrika Tikkun since its inception and through its contributions over the years has enabled Afrika Tikkun to serve thousands of children. Making a difference through sponsored events like the Satelite Challenge and Safelite Charity Classic, an annual golf tournament that raises money for various charitable organizations and the Foundation’s Impact Grants program, Safelite also engages communities it serves through a national giving campaign and volunteering.

For one month out of the year, Safelite and its employees set aside time to participate in an annual charity drive known as the Safelite National Giving Campaign. The month-long campaign is dedicated to raising funds, for local and national charitable organizations, through individual employee contributions and an assortment of fundraising events coordinated by employees in each Safelite market and department. Thanks to the logistical support of the United Way, funds are directed to charities of choice nationwide.

Safelite encourages its workforce to give back and contribute to improving their communities by offering all employees a paid day off each year to volunteer at a charity of their choosing. On top of one paid day off for individual charity work, employees are also offered an additional full day off from work to volunteer alongside local teammates and co-workers in coordinated charity events known as Community Days.

As the home of Safelite headquarters, Columbus and its surrounding communities are central to the success of Safelite’s business. In an effort to give back, the Safelite AutoGlass Foundation developed the Impact Grant program in 2011. Funded by the Foundation’s annual Charity Golf Classic, these grants are awarded to local non-profit and charitable organizations throughout Columbus and central Ohio. Before the beginning of this year, thirty-seven (37) Impact Grants, ranging from $25,000 to $50,000 each, were awarded to Big Brothers Big Sisters of Central Ohio, Boys and Girls Clubs of Columbus, CASA, Children’s Hunger Alliance, Community Shelter Board and Flying Horse Farms among others.

“We feel humbled and blessed by each charitable organization we’re able to help through our Impact Grants,” Feeney said in December.

Benefiting the central Ohio community, the American Heart Association will add 10 High Schools to their hands-on training program “Saving Our Selves (SOS) in Ohio: Removing Barriers to Survival during Cardiac Arrest through CPR in Schools Training for Columbus City School Students,” the American Red Cross will replace one of two collections vans, and Columbus Speech and Hearing plans to develop a community-wide, trans-disciplinary Autism Diagnostic Clinic.

“Giving back to our community is simply the right thing to do. We thank our partners and employees who have made it possible, and we look forward to the good work of our Impact Grant recipients,” said Feeney.

Additionally, the Safelite AutoGlass Foundation provides funds to each of its 90+ markets for local leaders to make donations to charitable organizations in their own communities each year.

A part of the Belron family, Safelite is America’s largest auto glass experts in the United States since 1947, serving 6,000,000 customers per year, in all 50 states, at more than 720 locations. As the world’s leading vehicle glass repair and replacement group, Belron is home to 25,600 employees, operating in over 30 countries and five continents.

“One of my proudest achievements is what we call the ‘Spirit of Belron Challenge’, a triathlon that we run every year, which I started after my 40th birthday,” Belron CEO Gary Lubner said. In an interview with Alec Hogg, founder and publisher of BizNews.com, Lubner recalled the origins of his philanthropic efforts.

“I remember my uncle Bertie Lubner talking about the charity he had started, Afrika Tikkun. He told me about a girl they had found in the streets of Alexandra who had been on the verge of death and how they saved her. He and I were sitting on this aeroplane [airplane] with tears streaming down our faces. He asked whether I could do something in London to help raise money for Afrika Tikkun. I got six people from work to join me in the triathlon and we raised a few hundred [British] Pounds.”

The grandson of Morrie Lubner, architect of SA’s dominant glass company, the PG Group, Gary was involved in the early stages of PG’s European expansion, joining after earning his MBA from the London Business School . With every intention of returning to South Africa, two and a half decades later Lubner runs what he has helped build into the world’s biggest automotive glass repair and replacement group.

“We’ve managed to create a magnificent Belron event, from a company point of view, where we have people coming from all over the world. They all have to raise money to participate. We cover their costs to get here and obviously the accommodation, but there’s a minimum amount that they have to raise for the charity. Coming here they not only meet their colleagues from around the world – I’m talking about glass technicians and call centre operators as well as senior managers, it’s a complete cross-section. And they’ve done something physical, they’ve trained, they’ve conquered challenges. Some people have even had to learn how to swim,” said Lubner.

A team consisting of Safelite Challenge top performers and top fundraisers have the opportunity to win a trip to London to participate in the Spirit of Belron Challenge. In September, the European version of the Safelite Challenge will celebrate 16 years of swimming, cycling and running for Afrika Tikkun. Last year the event saw 2,000 employees, friends and families, business partners and suppliers, from around the world, take part last.